Recently an email unexpectedly landed with a thud in my inbox. The title made me raise an eyebrow: “Having tricky times now that Gloria is a teenager?”

Tricky times? Seriously? Has the sender been secretly watching me through my front room window? Or maybe they’ve been reading this blog…

The email merrily continued with the heading “Keeping your kitten in line“. Ha. Ha. Ha. Are you kidding me? Clearly these people have never met Gloria Chufflepuff. I have more success in keeping my 3 boys in line than I do this rambunctious explosion of fluff. Don’t let those ‘angel wing’ markings on her back fool you.

“She may have a few bad habits…” You don’t say!  Are we talking about swinging from curtains, toppling scratching posts and pulling towels from rails to throw around the room? Or maybe partying in the litter tray at all hours of the night. Do we also include sitting in front of the television screen so that nobody can watch it?

Or eating freshly baked goods meant for a cake sale at school? Hmmm. What about wearing the standard lampshade as a hat and using the tassels as dental floss? Riiight.

“Does she ignore you, hide or clash with other pets?” Tick, tick and, oh yes, tick. Although it’s not so much ignoring you as answering back. You see, Gloria just loves to have the last word, no matter what the debate. She is particularly gobby, albeit in a cute, cuddly way of course. 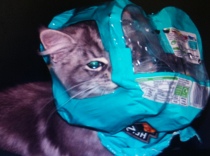 Hiding? Are we talking about trying to camouflage herself by sitting in the recycling bin with a baked bean can wrapper on her head? That’s just one way to try and ambush an unsuspecting human. (There are many more, believe me…) I think the picture says it all, eh?
Clashing with other pets: maybe we should just head down to the chicken coop to answer that one. Or read my last blog post here:  Friend Not Food!

“Make the Rules” read the next heading. Oh do come on! Really? “Now is the time to nip any behavioural problems in the bud…” continued the email. I smiled in a self-satisfied way. You see, some progress has been made in this department.
Popping balloons and gagging on the soggy remains = tie balloons up high out of the reach of pole-vaulting cats.
Eating flowers and poisoning herself =  keep your house boring and drab by refusing all offers of cut flowers and house plants.
Turning on kitchen taps = turn off water supply to house. Oh no. Wait. That won’t do. Remove taps? No. Redesign kitchen? No! Oh.
Repeatedly trapping herself in bathroom at night = remove bathroom door. No! *sigh*
OK so maybe we haven’t made much progress on that either.

Let’s go back to the email. Next heading: “Manipulative Moggies“. Ah. Right. “Do you feel controlled by your cat?” Now you’re talking. I mean, how do you deal with a cat who sits in the middle of the kitchen floor shouting, “HAM!” each time you make a sandwich? The advice is usually to ignore such behaviour, yet how can you ignore an elite fluffy ninja who can give an ankle a friendly nip, climb up human legs using claws alone or somersault onto the kitchen worktop at lightning speed? Controlled by our cat? Tick. 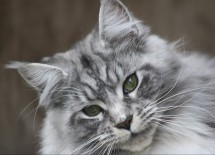 So there you have it. All boxes ticked on the email. Yes, we have definitely hit Gloria’s teenage years.