My parents have recently adopted a cat. Not just any cat of course: no, this cat is a huge 4 year old silver blue Maine Coon boy. Never having been owned by a Maine Coon before, it’s been a bit of a steep learning curve for them. 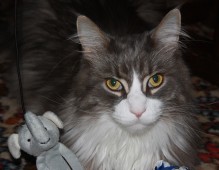 They named him Murdoch, looking at his regal stance and proud lion shaped nose. One week later, and this name has been reduced to Murdy Turdy or Humperdink, depending upon his daily activities.

This is what they have learnt so far about Maine Coon ownership:

1 All of the furniture in the house now belongs to Murdoch, from the armchairs to the coffee table to the dining room table. If you are in the way, Murdoch will move you. As my dad told me: “Murdoch goes and sits on your mum, and moves her about until she’s in the right position for him.” You see, my mum is barely 5 foot tall and rather petite, whereas Murdoch is particularly large and most insistent. My mum can’t lift Murdoch but clearly he can pummel her into a suitable shape to fit the position in which he wants to sleep, much to my parents’ bemusement.

2 You will never have a bath alone. Ever. The day after they adopted Murdoch, my mum ran herself a bath. In her words: “As soon as I squirted the bubble bath, fluffy boy jumped straight in!” By ‘fluffy boy’ she was referring to Murdoch, not my dad. She was relieved to see that, upon her somewhat harassed cry of “OUT!”,  the cheeky feline quickly exited the bath. What she didn’t realise is that he most likely ran off to wipe his wet, fluffy trousers on her nice, pretty curtains. 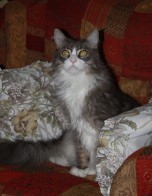 3 Water bowls have many uses. Murdoch looks at the water in the bowl and dips in his right paw. He then looks at his paw and shakes it vigorously. Next, his left paw is immersed in the water before being shaken, with the clear intention of redecorating the kitchen. Only once both paws are soggy and there is more water on the floor than in the bowl, will he deign to have a drink. By that time, the bowl will have been dragged across the floor to maximise the puddle factor.

4 You need to change your bathroom habits. I received the following text from my dad the other day: “We weren’t out long but when we came back home, the toilet floor was awash with water and there were big fluffy boy footprints everywhere. Need to close the toilet lid in future. Sod.” 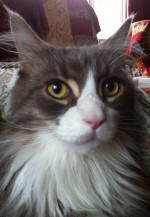 5 A comfort blanket might not be used as you would expect. The adoption centre insisted that Murdoch’s ‘comfort blanket’ needed to go with him to his new home. ‘That’s nice,’ thought my parents, ‘he has a soft blanket to sleep on.’ Erm, no. The day after they adopted Murdoch, my parents were having a nice civilised breakfast when along came Murdoch, one end of his blanket in his teeth, the rest trailing between his legs. What followed next certainly raised a few eyebrows. I mean, it tends to put you right off your food when your cat insists on humping away at his blanket right under your nose. It transpires that he engages in this lewd behaviour every time they sit down to eat. How unfortunate. According to my mum, “If you chuck him a toy, he does stop eventually.” Dinner and an x-rated show. Marvellous.

6 The house will never be quiet again. As a typical Maine Coon, Murdoch announces his arrival each time he enters a room. He also announces the arrival of any extra guests too, usually with a loud <miaow>, sometimes with a happy trill, occasionally with a growl: yes, he likes to growl at strangers (particularly at the poor man mending their neighbour’s roof). This rather surprised my parents, who are now wondering if they have inadvertently adopted a dog in disguise.

7 There will never be a love stronger than that between a Maine Coon and his staff. This beautiful big fluffy boy has stolen the hearts of my parents. They have never known a cat to saunter in, sit down, look at them with huge amber eyes and declare, “I am here. Love me.” Yet that is exactly what he did. The latest email from my dad reads: “Big fluffy boy has really settled in. He comes up to bed and snuggles up to me all night. He will probably want to read the sports section of the Times and join me in the pub. I will however, draw the line at him driving my car“. It’s good to see some boundaries being set then.

So welcome to the family, Murdoch ‘Murdy Turdy’ you big humping heap of fluff and love. And good luck to my parents who have unwittingly accepted a life filled with boisterous exploits, cheeky chuckles and fetid comfort blankets.