The day that Gloria realised she could jump onto the kitchen worktop gave no cause for celebration.

She had spent some little while jumping up and performing what could only be described as a ‘Scooby Doo scrabble’, moving all 4 fluffy feet together in a manic frenzy as she landed on the edge of the worktop and fell off. Repeatedly. Never one to be deterred, she clearly decided it was worth persevering with this charade, mainly because it could lead to an impromptu munch on some otherwise forbidden food that had been left unattended to cool. 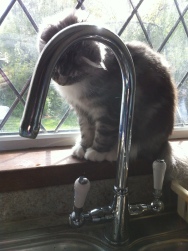 Of course, once she actually managed to stay up on the working top, she realised that there was something even more exciting to be discovered: running water. Oh yes.

The first I knew of this was when, having been out, I returned to find Gloria sitting beside the kitchen sink with her head bobbing up and down as she watched the water running from the taps with fascination. She was so entranced that she even failed to notice me standing there watching her, hands on hips, shaking my head.

“Why you little…!” I exclaimed. Only then did she avert her gaze and look at me with an expression that said, “Wow! Oh wow! Did you know this would happen if you push that shiny bit forwards?!”

Not wanting to miss any of the action, she then turned her attention back to the continuous stream of water. Turning off the tap, I grabbed Gloria, placed her firmly on the floor and said in a very stern voice, “No!”

Not that she took much notice of course; with a flick of her fluffy tail, she raised her nose in the air, gave an indignant <chirrup> and padded off in the opposite direction.

I’m sure it goes without saying that this rigmarole continued for the next few days. Word for word. Action for action. Until one day the situation escalated. You see, Gloria discovered 2 things that day: the hot tap and the plug. Together. 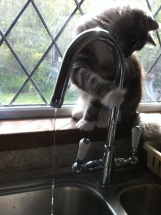 She cleverly chose a day when most of us were out, leaving a rather unobservant Handsome Hubby home alone with his little fluffy charge. The first he knew of Gloria’s new discoveries was when, having been pottering in the garden, he wandered inside only to hear running water. Yet the water wasn’t running free. Oh no. He could hear it collecting. As he sauntered into the kitchen, he couldn’t believe his eyes: the sink was full to the brim with steaming hot water, with the chuff of a cat sitting beside it, almost clapping her fluffy paws together with glee. Maybe her pores (or paws? Oooh what a pun) needed cleaning, who knows? Handsome Hubby shot across to the sink and turned off the tap. Had he been but a few minutes later, the sink would have overflowed with red hot water all down the cupboard and across the floor.

Hmmm I think I need a facial

Clearly disappointed that her fun facial had been abruptly cut short, Gloria jumped down onto the (thankfully dry) floor and crept off into the lounge to sulk, leaving Handsome Hubby to empty the sink and heave a big sigh of relief (whilst wondering how the hell the cat managed to put the plug in the plughole!).

Luckily the bath taps are of a different design: you turn them not push them. So Gloria has to wait for a member of staff to turn those on. That doesn’t prevent her from sitting on the side of the bath to splash the water as it runs from the taps though. No bathtime goes unsupervised with a Chufflepuff in the house. It’s like living with a penguin who insists on wearing a designer fur coat. 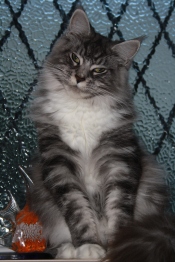 Mind if I join you in the bath?