Ever wondered what your cat does all day?

I know exactly what mine does.

I’d only been out for the afternoon.  I’d left a relatively tidy house.  Yet I came home just 3 hours later to a white, mohair carpet.  It was like an explosion in a candy floss factory, minus the pink.  Floof central.

Strangely enough, the cat is grey, which goes nowhere to explain how my carpet was covered in white floof.  Plus the sofa.  And the curtains.  The table too.  Come to think of it, the standard lamp was also rather skew.

As I surveyed the scene, in sauntered the chuffin cat – not looking bald as I had expected, but maybe a little dishevelled.

Gloria gave me a withering look, then looked at the floor.  There I spied a mangled fly.

“You spent 3 hours chasing a fly??” I exclaimed.

Gloria let out a sigh.  I got the impression that she would have rolled her eyes if she could have.  Instead she adjusted her tufty paws, swished her tail (oh look, more floof) and stared at the fly again.

Then I understood what she meant: she had spent 3 hours waging war against a monstrous man-eating menace, who had threatened to destroy the house and everything in it.  So what’s the problem with a bit of floof and a few broken ornaments?

Satisfied that I now had an accurate grasp of the situation, she stood up and nonchalantly padded to the door.

Then with a turn of her head, she cast her eye across the scene and fixed me with that familiar glare, the one that says, “Look at the state of this place, human staff member, you really should perform your housekeeping duties to a higher standard.  No feline needs to spend her day paw-deep in discarded floof!”

My cat has lost her marbles
It’s pretty clear to see
she’s as nutty as a fruitcake,
as moronic as can be.

She doesn’t climb like other cats,
hugs tree trunks like a bear
to hide from birds and squirrels
and pretend she isn’t there.

My cat has lost her marbles,
she’s just stark raving mad,
using my poor stomach
as her personal launch-pad.

Don’t move your head too close to her
and mind those tufty paws,
for when she gives a head massage
she uses teeth and claws!

My cat has lost her marbles,
she’s a little bit ‘cuckoo’.
She cavorts around the bathtub
and then tries to lick the loo.

She doesn’t drink like normal cats,
but uses both her paws
to throw the water everywhere
then lap it off the floor.

My cat has lost her marbles,
it’s fairly safe to say
She’s demented, daft and dizzy
in a bonkers sort of way.

She’s checked under the sofa,
with a wiggle and a bound,
to alleviate her loss although
no marbles can be found!

But I love my potty pussy cat,
my fruit-loopy feline.
She might be cracked and crazy
but she’s special and she’s mine!

I wrote this post as an entry for the February #BlogBattle as seen on Blog Battlers and reblogged on the excellent Anita Dawes and Jaye Marie, where I found it.  The word prompt is ‘loss’… but Gloria twisted my arm with her fluffy attitude and rather than writing about something entirely different and rather sombre, the post naturally became all about her … as always!

Just a thought but after being Gloria’s Chief Human Staff Member for 4 years, maybe I’m the one who has lost my marbles…

Today I had an argument with the chuffin cat.  It wasn’t a pleasant experience. I have the scars to prove it.  That’s the last time I try to wrestle a piece of holly from her armpit. Until next week that is, when I’ll have to do it all again.  But then it will probably be a bramble stuck in her bum fur, just to change it up a bit. Maybe I should sell ring-side tickets to watch the battle.

Anyway, keen to put our differences aside, I bought her a catnip ball.  Not a tatty, fabric shape infused with 3 solitary leaves of catnip.  No, this was an entire ball constructed of compressed catnip: a deluxe treat. 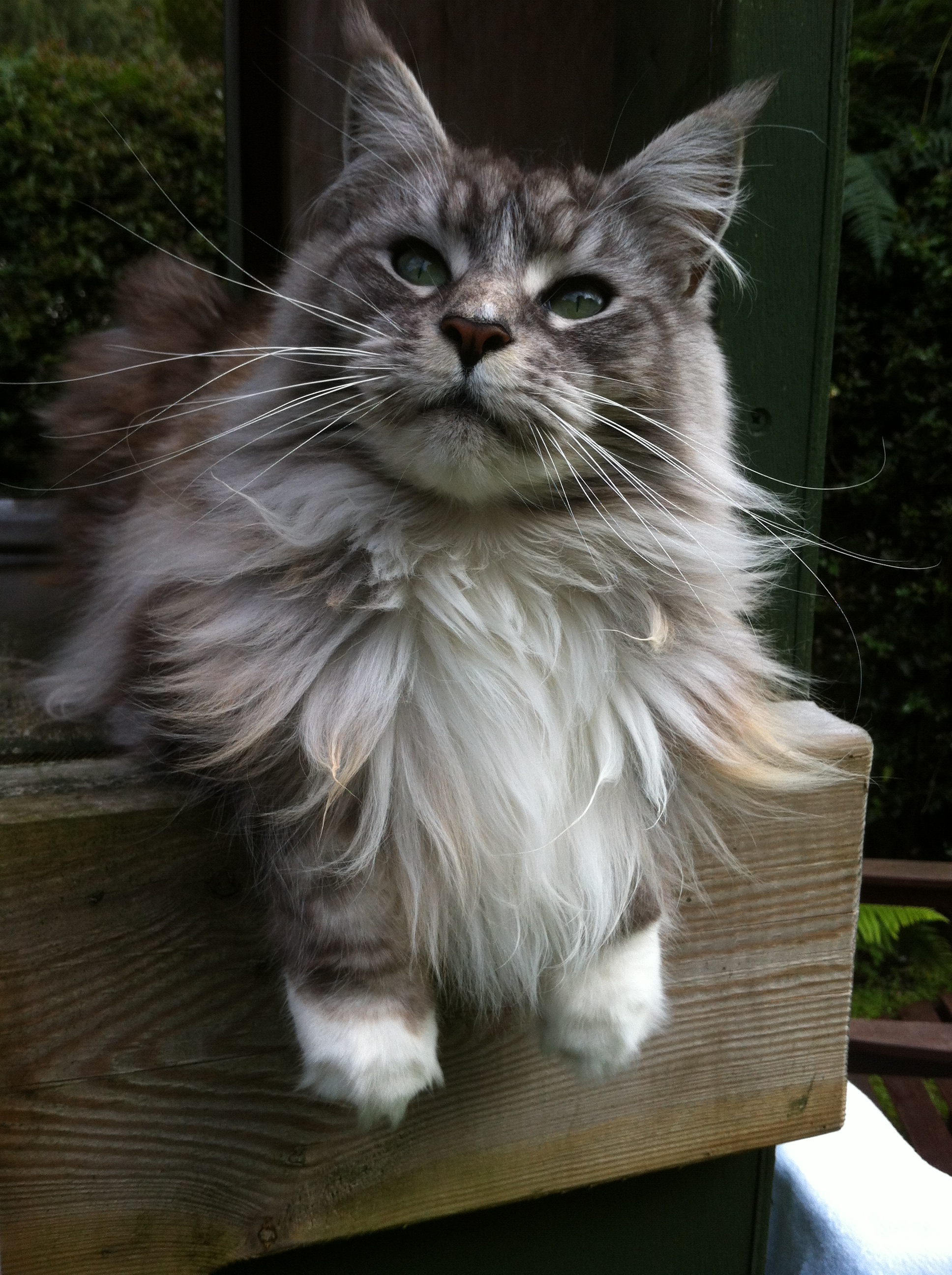 As I handed the peace offering to Gloria, she eyed me suspiciously.  Two minutes later, having wrestled with it, batted it, pummelled it, dribbled on it and sat on it, she promptly stood up and cast it aside.  Then she flounced off outdoors without even giving it a second glance.  Assuming that put an end to our disagreement, I made a well deserved cup of tea.  As I headed outside with my mug, I felt content in the knowledge that I would be able to sit peacefully in my bear chair, without the worry of being clawed through the wooden slats by a revenge-seeking tufty paw.

Ten minutes later, I received an unexpected present from Gloria in return – a plump, soggy, brown mouse deposited carefully at my feet.  A very much alive mouse who promptly took two large gasps of air, and then waddled off at a brisk pace.

Gloria looked from me, to the mouse and then back to me again.  Clearly she was expecting some form of action.  We watched together as her ‘offering’ disappeared back into the undergrowth, like a mini spy on a secret mission, having infiltrated enemy lines. He was only missing the dark glasses and briefcase.  Maybe he’d left them in the hedge earlier.

Gloria threw herself on the grass in front of me, an air of disgust hanging like a dark cloud over her fuzzy head.  She glared at me.  I glared back.  And thus we ended up right back where we started from.  In my role as Chief Human Staff Member, I had yet again failed abysmally in trying to live up to Gloria’s high expectations.

Note to self: you can never win a fight when teeth and fluffy trousers are involved (just to clarify, both of those relate to the chuffin cat and not to me).