Doris DooDah has recently changed her name; not by choice but out of necessity. She is now known as Doris ‘friend not food’ DooDah. The reason? Yep, you guessed it: one over-enthusiastic fluffy gladiator named Gloria Chufflepuff.

We recently decided it was time for Gloria and Doris to meet. Having seen the way Gloria likes to chew an ornamental chicken that we received as a gift, a series of supervised playdates seemed the safest thing to do. Let me give you the run down so far:

Playdate 1 – through the patio door.
Aim: to let Doris potter about the garden whilst Gloria watches through the glass.
Result: chicken spied cat and squawked in panic. Cat spied chicken, licked her lips, pounced and headbutted the patio door.
Verdict: worrying.

Playdate 2 – at the coop.
Aim: to take Gloria down to the coop to see Doris through the safety of the coop wall.
Result: chicken spied cat and crowed continuously in a state of sheer panic. Cat spied chicken, paced the perimeter of the coop in a sly, scheming manner then pounced at the mesh enclosure, tufty paws ready for action.
Verdict: could have gone better.

Playdate 3 – face to face.
Aim: to let cat and chicken out in the garden together, using a human shield between them.
Result: Cat behaved surprisingly well and spent an eternity stalking the chicken in a protracted game of ‘follow my leader’. Chicken couldn’t believe her luck.
Verdict: just plain odd.

Playdate 4 – sharing the garden.
Aim: to let cat and chicken socialise in the garden together, since the last playdate went so well.
Result: cat spied chicken and went into full-on hunt mode* (*wiggling bum, stamping feet, flattened ears) leading to ninja battle cry and ambush. Chicken’s eyes went the size of saucers, accompanied by incessant clucking, squawking and use of various chicken expletives (note to self: must apologise to the neighbours)
Verdict: disaster. Chicken needed a grape to calm down.

Playdate 5 – hired protection
Aim: to escort the chicken safely around the garden, chanting ‘friend not food’ whilst cat watches in a perplexed heap.
Result: sons no 2 and 3, along with me, formed a guard of honour around the chicken, who was escorted safely to a bear chair, where she sat beside me and blew raspberries at the cat. Cat sat in the shade and sulked.
Verdict: labour intensive but stress-free.

Playdate 6 – retaliation.
Aim: for the chicken to ‘man up’ and sort the cat out.
Result: chicken was escorted to bear chair again, using full guard of honour. Cat skedaddled under chair and lurked about, eyeing up the fat chicken above her. Chicken panicked and shot a projectile turd in the cat’s direction – missed the cat, hit a ‘guard’ who promptly resigned. Cat disgusted (and slightly impressed), scurried off to fight a butterfly.
Verdict: success. For a day.

I’m on a fly hunt.
I’m going to catch this one.
I’ll prance and I’ll pounce,
I’ll frisk and I’ll flounce.
Trill, trill, chirrup, chirrup.
‘Till it flutters and soars
and I fall on the floor.

I spy a SQUIRREL!

I’m on a squirrel hunt.
I’m going to catch this one.
With it’s big, bushy tail
I really can’t fail.
Trill, trill, chirrup, chirrup.
So I cavort on the floor
then head butt the door.

I spy a CHICKEN!

I’m on a chicken hunt.
I’m going to catch this one.
I’ll stalk her and seek her,
like ‘follow my leader’.
Trill, trill, chirrup, chirrup. 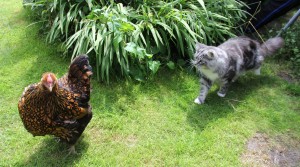 ‘Till she squawks in my face
and puts me in my place.

All this hunting is hard work…